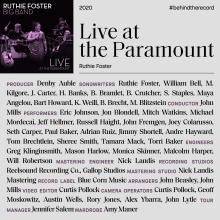 I'm very excited to announce my first GRAMMY® Nominated Album mastered here at Nick Landis Mastering. You'll find FYC information and complete credits to everyone involved in the project below. Ruthie Foster is nominated in the Best Contemporary Blues Album category for the 63rd Annual GRAMMY Awards® which will be televised live from the Staples Center in Los Angeles Sunday January 31st, 2021 on CBS. You can view this album in my Client List section of my website too.

This album can be listened to in a variety of places including: Spotify, YouTube, Apple Music, Deezer, or Pandora, among others. Physical copies can be purchased via PortMerrch.com

Mixed by Will Robertson at Gallop Studios in Brookhaven, GA

The Ruthie Foster Big Band is:

Did I miss something? You see a link here that is incorrect? Did I spell your name wrong? Let me know! I'd like to have the most accurate information I can here. Other Credit listings on AllMusic.com and Discogs.com

I featured "Live at the Paramount" on my FaceBook page during the #BehindTheRecord advocacy event.

Join me in recognizing all music creators who work #BehindTheRecord, an initiative to #GiveCredit where credit is due! These are the amazing people behind the album Live at the Paramount, thank you all! Let's celebrate creators who work behind the scenes & bring music credits back. #WeAreMusic

The big band’s punchy horns lend a Stax/Volt vibe to a rendition of Foster’s original tune “Runaway Soul,” before the singer engages in a buoyant call-and-response dialogue with fiery tenor saxophonist Joey Colarusso.

A three-time Grammy nominee who seems destined to win one eventually, Foster organized something special for her ninth release on the Houston-based Blue Corn label, taking the stage with 18 musicians drawn largely from Austin’s richly talented jazz scene.

But it’s the last two numbers that are standouts. Fly Me To The Moon is a brilliantly arranged big band tune which Ruthie has great fun with. The grand finale is the murder ballad cover, Mack The Knife which is astounding. Ever-evolving her style suits her on this fine album, a very different sound and will attract more fans to her eclectic music style, exquisite sound and arrangements throughout.

Ruthie Foster is a 100% no-foolin’ force of nature with vision, talent, and soul to spare. Get close with this record and let her put you back together.

Ruthie proves herself to be as good at this type of music as she is in soul, blues or gospel styles with her wonderful voice and warm personality.

It's so tough for some artists to reproduce the energy of a live performance. But the Ruthie Foster Big Band's magnanimous appeal inflates any potential languor. Together they indisputably position Live at the Paramount as one of the best live albums of 2020.

The charts are all well-planned & well-recorded. The show has 10 horn players, a guitarist, keyboardist, bass, drums & 3-backing vocalists who dazzle throughout.

No Depression - Even in Front of Her Big Band, Ruthie Foster Stands as Singular Voice

She seems to glide along a few feet off the ground on her rendition, little scats sneakin’ in every few bars as she heats up the joint, getting brassier and Satchmo-ier as the song progresses. It’s the closer, naturally, ’cause nobody, not even her, could follow this one.

Once again the sensational Foster catches us off-guard with this wonderful Big Band release. You have to hear this.

International Standard Name Identifier is new metadata to resolve name ambiguity for contributors to creative works. This number can define a person, like a writer, artist, performer, producer, etc., or it can define an organization, like publishers, studios, aggregators, etc..

The newest metadata standard for music is here apparently and it is RIN-M. Soundways has a free plugin that gets saved in your DAW when you are creating the tracks and you can add everyone's information and send it along. It is a cool idea on solving the issue with how recording credits are stored and transferred. You can download the plugin here.

Sound Exchange and The Recording Academy have partnered in advocating for legislation and educating the community about performance rights.

This week, the authors of The Indie Band Survuval Guide, Randy Chertkow and Jason Feehan, spoke at the Grammy Pro Business Summit in Austin. They gave an information-dense presentation of basically everything a band trying to make money needs to know.

Nick Elected to Grammy Board of Governors

Nick Landis has been elected to the National Academy of Recording Arts and Sciences - Texas Chapter Board of Governors for the 2014-2016 term.  Nick has previously served on the board of governors from 2008 to 2012 and as Vice President from 2011 to 2012.